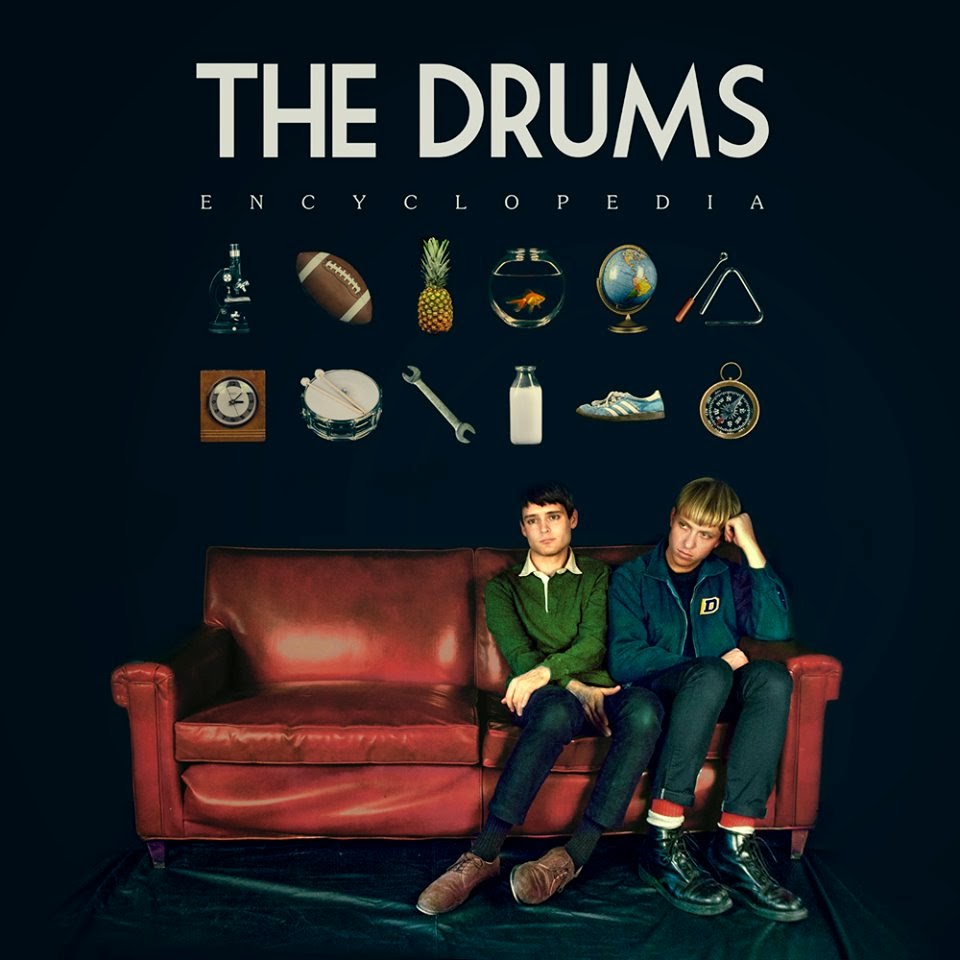 GBHmusic : Hi Jonny ! You got back to
the original line up with only you and Jacob for this new album. And I have to
say this seems to make sense regarding the beautiful result ! So how did you
proceed to release « Encyclopedia » ?

JP : Wow that’s a very nice
thing for you to say – and we agree ! I feel like being a four piece was really
nice and worked while it lasted, but things have changed over the years, and we
have found ourselves in a new and exciting position. It is back to the founding
members, Jacob and I and we find that is when we make our most exciting
and adventurous work. It’s that whole thing where adding people to the mix can
really start to dilute the art and in turn, get everyone frustrated. When
our old band members left, there was a good year when we were
really disillusioned and pissed off, but one day, it just clicked. This
was a blessing in disguise and we were again free to get completely crazy.
We didn’t have to ask anyone for approval or much less their opinion
and the result is « Encyclopedia«  !

GBHmusic : Even the cover of the album seems to be a strong statement, like
“we tried to make space for more people, but in the end The Drums are
actually just the two of us”. Or did I get that wrong ?

JP : Good eye. We wanted the album cover to be
beautiful, but also tell a bit of the story of The Drums. One can spend
his whole life looking for the right piece to fit the puzzle, but sometimes you
gotta realize that you ARE that piece! We were complete as a twosome and,
in a weird way, adding more members made us incomplete! It was a big life
lesson… And that’s not to say there aren’t amazing people to work with,
but we’ve always found that our best work comes from digging deeper into
ourselves…

GBHmusic : This new album departs a lot from The Drums’ older
sound. Do you consider it as a sort of rebirth for the band ?

JP : Well, I guess rebirth is a good word for it.
We are definitely doing things and saying things that we’ve never
done or said in the past. When we started out and made the « Summertime! » EP,
and most of the debut album, we really had no idea that anyone would ever hear
them. We are really shitty at playing our instruments and did not know how to
properly record, but that was fine because as far as we knew we were gonna be
the only people who would ever hear it and it was a way of releasing some
creativity that really need to get out… But the opposite happened – people
really took to that EP and then to the first album and before we knew it we
were making Portamento and we recorded that record basically while on tour in
different cities from NYC to Perth, Australia – but always in a bedroom or a
hotel bathroom, and we were touring, touring, touring and finally we just
crashed. It was full throttle for 3 years with no breaks and three releases. It
was a lot. With Encyclopedia we were finally able to slow down. We really took
our time, and learned new ways of doing things. We decided that if we were to
make another album, that it would really need to be a beautiful and majestic, glimmering sort of album. We knew we
wanted to do away with all the big hall reverb that we always put on anything.
The sounds are much more upfront as are the vocals. Everything is pretty bare
and that, we thought, was the only direction we could go. If we kept doing the
same thing, dark memories would flood our studio room and we would not be able
to write.

GBHmusic : I couldn’t
really put the finger on any substantial musical influence on « Encyclopedia ».
Do you even listen to music while recording an album ?

JP : That is hands down the biggest compliment I
have ever received. I’m smiling right now because it feels like you
are really paying attention. You seem to catch all the signals ! You are right ! I don’t listen to
anything when I am recording and writing. It is far too easy to be influenced
by the wrong things, or even the right things. When we record we look at
visuals a lot, whether it’s a beautiful film or some great photographs, or
sometimes it is a picture in our minds. I feel the only way to avoid
this collaborative-heavy culture (which in the end I think waters
everything down and rips out any identity that the band may have the
possibility to build) – is to shut everything out. I guess if I had to describe
the sound of Encyclopedia, it would be The Never Ending Story meets a garbage
can – but in a really glorious way.

GBHmusic : Magic
Mountain, the first single seems to have a real cathartic purpose.
What’s the story behind that song ?

JP : That was one of the earlier tracks we
recorded for the album, and at the time we had a lot of built up anger and we
were feeling betrayed and attacked by the people we loved the most. It is an
angry song but also a hopeful one. It speaks of a safe place that we found
together to make music and feel OK, and it’s about fighting to the death
to preserve this wonderful place…together.

GBHmusic : Your second album Portamento was released three
years ago. In the meantime, you and Jacob both started solo projects. To what
extend did they influence « Encyclopedia«  ?

JP : I think we both gained a whole new skill set,
or at the least were able to sharpen the tools we already were working with
while making our solo work. When we finished our solo albums, we came back
together and had all sorts of new ideas. Our main thing was to make each song
very different from the next and that took some flexing. We thought « let’s
do whatever music styles we want, or even invent our own, and we will
still sound like The Drums, because at the end of the day, we still don’t know
what we are doing- but we do our best and that connects it all together ».

GBHmusic : Some of the lyrics show a real angriness. Are you still working
out family issues ?

JP : Family… it is life’s great lottery. Sometimes
it works out for people, and other times it does not. I suppose I can
understand how some people feel like they owe a lot to their parents, but
overall, I never really understood that concept. Two people fucked and felt
pleasure, and 9 months later, a baby arrives. The baby was never asked about
this, but then must conform to the norm and become a slave to it’s parents!
More often than not, having a child is a way for an aging person to feel
validated again, or do be “born” again themselves. At the very least it is
more of YOU in the world, it’s an extension of YOU and while I do
understand that procreation is our greatest instinct, I can’t help but
focus on the ugly side of reproduction – probably because of my experiences as
a child growing up. There are really wonderful exceptions, of course, and the greatest lesson
I’ve learned is that you can build your own family – just make sure you choose
the right people – otherwise it’s damage on damage. Build your house slowly
with people who show love and support – brick by loving brick. If you feel in
your gut that someone might not be good for you – you are already right- get
rid !

GBHmusic : Since the
beginning of The Drums, you did not hesitate to be very open about
being gay, which is kind of refreshing, considering that even in 2014 it’s
still not that frequent among public persons. Has your honesty been more an
asset or a problem in your career ? And to what extent does the new record
reflect that honesty ?

JP : I really don’t know if people care or not
that I am gay and I don’t know if that should even be a story ! It is the last
thing I worry about for myself. I’ve been shut out by most of my family and
yeah sure there is a bro-club situation happening in the indie music scene at
least here in New York. All these dudes in all these bands wearing dresses and
putting on lipstick for their show, but then going home to their girlfriends at
night and that is fine, but a guy who puts on lipstick while on stage, and then
keeps it on while he kisses his boyfriend when no one is looking often
gets the cold shoulder. Guys in bands here seem to like to play
with flamboyancy when the spotlight is on them, but then they go home
their lives have nothing to do with that vibe. Being the new Kurt Cobain and
wearing dresses seems to be a big thing right now, but the thing is Kurt
actually had a message and strong opinions on many issues. He was an advocate
for homosexuals – but a true advocate ! It’s hard to almost not feel insulted
when I see a guy who has no gay friends throw on a wig for show – but with no
real reason to do so – but maybe I shouldn’t get frustrated. Maybe it should be
refreshing, but often it just seems so transparent.

GBHmusic: Jacob and you
are starting the tour for the release of Encyclopedia in a few
weeks. So what is your state of mind right now ?

JP : We have never been so busy in all our lives.
Every waking second is filled with lots of work. We are really going for it
with this new live show. Can’t wait to see you all again and this time, we aren’t
playing around.