GBHM : Anna, you and Shane [ed.: Butler, the other
guitarist and founding member] met at the « Boston School of the Museum of Fine
Arts » and used to hang out around the « Whitehaus Family Record » scene. Was forming
Quilt a way of combining your mutual love
for different kinds of art, i.e. visual art and music ?

Anna: Yes, we met at school and we
happen to have been also hanging out in the scene outside of our school. So, forming
the band just came up very naturally as a way of mutual appreciation I guess. It
wasn’t so much intended to be a visual art project although we can’t help but
bringing it out occasionally. I think that it’s more a like-minded person kind
of venture. And now having John and Keven [ed.: Lareau, the bass player] has
rounded everything up. We also met our first drummer Taylor at school and we’re
all friends. I mean, Boston is small. So it just sort of happened very
naturally.

GBHM : Why did you choose this band name ? Is it because you
see your sound as a sort of patchwork ?

Anna : Well, not quite, I think it was orderly random. It just sort of
came up and we decided to stick with it. It was not a conceptual decision.

John : It’s just a cool, simple, easy to remember band name. I think
that’s kind of what you need if you wanna be a band. I met so many people that
just have the weirdest / longest / strangest band names and it stays in my mind
for maybe 2 seconds and then I forget about them.

Anna : But it’s fun watching people coming with their own interpretation
of the name. We left it open.

GBHM : But did you ever receive quilts as gifts from fans ?

John (laughs) : I wish ! I love quilts. But sadly it never happened.

GBHM : I’ll make sure our readers get the message ! So,
let’s talk a bit about the new album. Held In
Splendor seems to have been
written with a time machine, mixing 60’s psychedelica and country, with a touch
of folk and modern dream pop. What have you been influenced by ?

Anna : Well, everything you listed I suppose !
We all share a lot of music with each other and always have. We also all grew
up in the 90’s and 2000’s and listened to a lot of different music during our
childhood and teenage years. It was all sort of stuff ! So I think the sound we
make is the meeting point of all our favorites. John and Shane grew up
listening to a lot of Weezer and Blink 182, which I didn’t, I was more listening
to Alanis Morissette and Fiona Apple. So all these influences are coming
together in funny little ways, behind the obvious influence of the 60’s or the
70’s.

Anna : That’s right, we even listen to
Gregorian chants.

GBHM : Interesting! In which way has been the
choice of Jarvis to produce the album determining ?
How did the work go with him ?

Anna : It was great!

John : It was awesome recording with him. We had another producer in mind
and it kind of fell apart at the very last moment. We had known Jarvis for
years.

Anna : We were casual friends. He was already in New York and that’s
where we knew we would be recording. It had done a couple of records we really
liked, like for our friends Widowspeak, I really love the way their first album sounds and he produced it, so
again, it was just all very natural. And he was available ! So we called up
Mexican Summer and brought up the idea, and with a couple days it was all
settled. It was very easy. And the work itself was very immersive. I think my
ears developed a lot during the recording sessions (laughs).

GBHM : You’re playing here in Angers at a
Psychedelic Music festival, from which we even have two in France. What do you
think about this psych-rock resurgence ?

Anna :
Yeah, there is obviously a lot of Psych Fests that pop up for some reason. But
I don’t know if there is actually a reason. Waves of expression happen all the
time, things catch on and people get into a certain sound for a little while.
Our parents’ generation sort of created this sound and now that we are at the
age they were when they created this music [ed.: Anna is the daughter of Steve Rochinski, a jazz guitarist], that might have something to do with it, a
kind of consciousness of what we grew up listening to. I don’t know, there are
probably lots of reasons, but I think it’s a good thing, because there are lots
of bands I really like playing psychedelic music.

GBHM : Did
you see (and enjoy) some other acts ?

John : We
just watched Asteroid #4. Our friend Matt [ed.: Matthew Rhodes] plays bass with
them. He’s our age, the rest of the guys are older. We’ve known him for a
couple of years, but I’ve never seen theim play before, they’re brilliant!

GBHM : Oh
yeah, sorry, I only have a couple of questions left, trying to do it quick, so
we can all go to their gig !

Anna :
No, it’s all good ! No problem ! I’d like to see Allah-Las as well, but I mean
it’s hard to choose, I want to see everybody, seriously.

GBHM : Your tour van crashed last March in Kentucky and has been destroyed. Luckily
none of you have been seriously injured. How did the donation go ? And do you
still enjoy touring despite this sad episode ?

Anna : It definitely brought a fear
in the back of every touring musician’s mind, but the donation process was
amazing, we were able to found almost the half of the prize for the new van.
We’ve been sending out tapes as “thank you gifts” in the US and brought the
Europe tapes with us here [ed.: we’re waiting for ours at GBHmusic !]. So it
went great, and the new van is totally solid. It was crazy though because I had
just 10 days to find a new van between tours, I woke up every morning with that
in mind, it was my job, searching and sending 1,000 emails and usually it would
have many miles on it or it would be disgusting or too expensive. But then,
this one perfect van fell out from heaven.

John : It belonged to a band, so
that’s kind of a trust worthy thing. A band selling a van to another band, they
have to be honest with you. So we got lucky.

Anna : And coincidentally, it ended
up being a band I had common friends with. It was crazy and perfect at the same
time, a very magical thing. It’s in John’s mum’s driveway right now, just
waiting for us now, smelling like rotten banana, because we got as much shit
out as we could before leaving on tour but not everything and…

John : …they were weird creatures
growing on it…

Anna : …and there is probably a
family of rats living on it right now. Just kidding, I’m sure it’s fine and
your mum took great care of it.

John : Anyway, we’re very thankful to
everyone who donated, seriously, it blew our mind away.

GBHM : I think people were quite shocked after they heard about the accident,
I mean I was, so it’s kind of a natural process for them to donate.

John : This accident was the craziest
experience of my entire life.

Anna : It could have been so much worse !

John : I always wear a seatbelt now,
because I wasn’t wearing a seatbelt at the time of the accident, three of us
weren’t, me, Keven and our friend Natalie who was on tour with us.

Anna : But everybody kind of kept
each other in, they were all packed in the back. I was driving. Keven flew in
the backseats and ended up having an injured rib. Anyway, it’s all good now. We
never got an official diagnosis of what happened, but we have some ideas. It’s
beside that at this point, it kind of vaporized out of our lives.

John : Thing is, that was by far the
craziest tour I’ve ever been on my all life. On that tour, so many crazy things
happened. But the accident was definitely the highlight !

Anna : Yeah, it was not the only
thing that was fucked up.

GBHM : You got me curious, so what else happened ?

John : It was like the best road
movie ever.

Anna : With the difference that you
can’t make that shit up ! Just weird creepy hotels, with creepy people in there,
crazy weather like tons of snow…

Anna : Strange vibes but although
cathartically fun experiences. What else was fucked up ? Running into a piece of
metal in the middle of the road and the van got on fire while we were barefoot…

GBHM : Wow, did someone film that ?

John : We filmed some things on tour
and we’ll make music videos out of it.

GBHM : What’s coming next after your European tour ?
Any future plans ?

John : We have a few show in October, but the priority will be to take it
pretty easy and in November we gonna start writing a new album and hopefully
record it in the winter or spring. We have basic riffs and basic structures for
a few songs and I’m really excited about all them. And we’re all working on our
own stuff too.

Anna : We all will be retreating for a tiny bit in October but we [ed.: at
this point, Anna is interrupted by the arrival of Keven].

GBHM : Hi Keven, nice to meet you, you just missed
the interview.

Kevin : Well that’s totally fine, nice to meet you too, I just came to
have a beer with you guys.

GBHM : Alright, so cheers on that ! 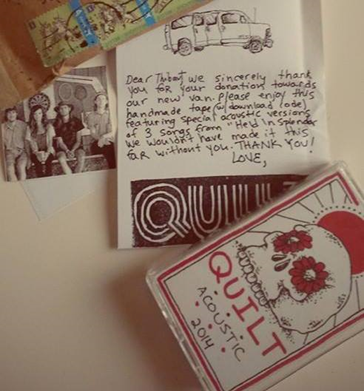